Powder snow crunched underfoot. I edged around the corner of the old winery; isolated in the high Caucasus, not far from the Russian border. Clammy sweat traced my spine despite the freezing temperature. I tried to suppress my breath, lest it give me away and spook my quarry. There he was. George. He hadn’t seen me, his eye-line beneath his collar. I took my opportunity, maybe the last I’d get before the Georgians bundled him into the coach and away to safety. My index finger hovered. I took the shot. Calm and clean, but it would be some moments before I could tell if I’d hit the mark.

I had landed in Tbilisi 48 hours earlier, as one of a number of international delegates invited by the government to discover the country’s wines. Cosseted from the outset, I had dined with dignitaries, met with winemakers and attended a trade tasting; all as part of a push to raise international awareness of where many consider to be the birthplace of wine.

As to exactly when people first noticed that grape juice fermented into wine will likely remain conjecture. Depending on your sources, dates vary from 6000 to 9000 BC; but it is widely accepted that the people of the High Caucasus, in which Georgia nestles, were the first to cultivate vines and make wine. The country is justly proud of this. Wine is ingrained in folklore, preserved in legend and glorified in architecture to a level not encountered elsewhere. But whilst history intrigues me, what had brought me to Georgia was a desire to find out whether the wines were any good now.

A look at the statistics tells you they should be. The country has the ideal topography, climate and soils to make wine to rival the world’s best. It also has 500 native grape varieties. (Thankfully for those of us wanting to get acquainted with the wines, only about 40 are used commercially.) But a cursory peek at recent history makes the prospect of quality wine less certain. The twenty years since independence from Soviet rule is not a long time to shake off the communist paradigm of collective winemaking practices that are never conducive to quality. Thus my expectations weren’t high as I attended the trade tasting.

The tasting started well with a few fresh, modern styles, mostly made from the indigenous white Rkatsiteli, Mtsvane and Chinuri, and the characterful red Saperavi amongst others. But things took a turn for the worse in an area signed ‘Natural Wine’.

‘Natural’ is the latest buzzword in the wine world, with more column inches than the Acropolis currently devoted to it in the trade press. It’s the phenomenon of growing grapes and making wine with no mechanical manipulation or chemical intervention. In Georgia natural wine is often fermented underground in kvevri, clay vessels that differ little from those used in Neolithic times.

What I previously encountered had convinced me that the resurgence was faddish: the equivalent of crafting an iPad from wicker. What I tasted now did nothing to sway me. The wines were oxidised (having had prolonged and loosely controlled exposure to air, something most winemakers fervently avoid) and bitter, having been left with the skins for too long in fermentation: in all, simply wrong!

‘I can tell you’re not impressed.’ A ruddy-cheeked winemaker eyed me with paternal indulgence as I scribbled my notes. ‘Consider that we intend the wines to taste so.’

Intrigued by the notion that preconception had clouded my judgment, I tasted all of the wines again, this time allowing for the proposition that they should have an oxidised style and be more bitter than I was used to.

It was a complete revelation. Placing those elements to one side allowed me to view the wines afresh. In some cases I found further faults! Instances of under-ripe grapes, poor wine hygiene and careless handling lowered my initial scores for these wines; but with others I found that setting aside those first prerequisites allowed me to discover pleasing flavours and characters that I’d not been patient enough to find before. There were a handful of truly great wines I’d initially written off and now found myself really enjoying.

I was delighted to have found something that had challenged my preconceptions and wrong footed my tastebuds, so I elected to discover as many natural wines as I could on the trip. This I may have indulged in a little too enthusiastically over lunch at the winery in the mountains on the last day. I can find no other explanation for my engaging in an afternoon-long challenge with the other English wine trade delegate to get the best photograph of a George look-alike – from the seventies sitcom George and Mildred. An unusual undertaking I grant you, but refreshingly challenging nonetheless – a bit like Georgian wine… 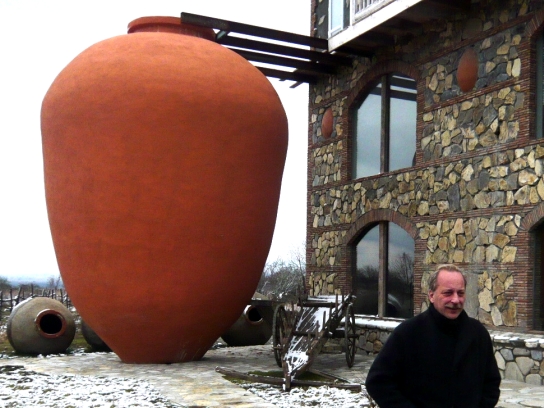 Posted in A Taste of the Future - travels to emerging wine regions on Sep 24, 2016