As the three-kilo cheese left my fingertips I realised I had made a serious mistake. It would have been prudent to check the woods either side of the fifty-metre strip of perilously steep pasture prior to launch. The cheese started with a short roll, hopped from a tuft, then quickly gathered pace down the 40% gradient, bouncing in increasingly long, high arcs; a golden projectile cartwheeling on a collision course towards an elderly couple and their spaniel who had just emerged from the trees. If it were ten-pin bowling I could not have aimed better.

Pam and I had spent the previous day with Jonathan Crump, a Gloucester cheesemaker of impeccable authenticity, and he had mentioned that the famous Cooper’s Hill cheese rolling competition had not been run this year due to Covid restrictions. I awoke that morning determined that the 200-year-old tradition should remain unbroken.

Cheese making in the Vale of Severn is rarely matched anywhere else in the world for its pedigree, its rich pastures and even maritime climate having provided ideal conditions to produce flavoursome cheese for over a thousand years. It began with ewe’s milk, but by the 1300s cow’s milk had joined it and from the 1500s the Gloucester breed of cattle had evolved to be the dairy cow of choice, the reason cited by pundits for the cheese’s rise to fame well beyond its county boundaries. The ‘best’ cheeses latterly became known as Double Gloucesters, made from full-cream whole milk and originally coloured with carrot juice or beetroot juice to differentiate them from the leaner Single Gloucester cheese, which was made from milk partially skimmed of its cream for butter. (Annato, a colouring derived from the seeds of the South American Achiote tree, has long since replaced root vegetables as the colouring ingredient for today’s renowned orange iteration.) Double Gloucesters went to market, whilst Single Gloucesters were traditionally kept for the farm table.

Disease struck the Gloucester breed in the late 1700s, marking the turning point for Gloucester cheese. New breeds, coupled with improved methods and loose regulation, led to overproduction and a decline in standards. The next century brought industrialisation in the form of creameries, further diminishing farm production; a blow that was later compounded into a knock-out by the two world wars. By 1968 there were no farmhouse producers of Gloucester cheese at all in Gloucestershire, and in 1974, when Charles Martell bought three Gloucester cows, there were only forty of the breed left in the world. The renaissance for artisan Gloucester cheese came when British cheese guru Patrick Rance convinced Charles to become a cheesemaker, thus inspiring a new generation of excellent farm producers of both Double and Single Gloucester cheese.

Jonathan Crump’s Double Gloucester cheese (catching the early morning sun as it hurtled downhill), is made from 100% unpasteurised Gloucester cattle milk to a classical recipe and is as authentic as an ancient Gloucestershire cheese can be. That is in all but one crucial respect for a cheese destined for the Cooper’s Hill race. Historically, if intended for this prestigious descent, the cheeses’ rinds were deliberately toughened by maturing them on wet floors smeared with potato skins. This was a practice I was delighted Jonathan had forgone for my particular cheese as it struck a hillock twenty metres short of its unsuspecting victims and exploded into fragments that troubled them no more than to wonder what on earth was peppering the nearby undergrowth. 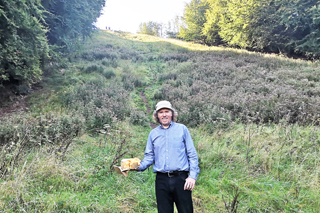 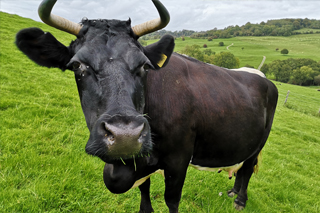 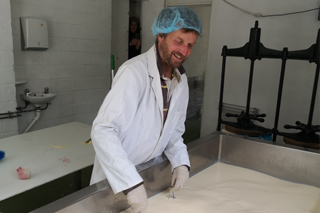