We had encountered little since the motorway’s end on our journey east from Budapest, the roads eerily silent save for an occasional cart emerging through the mist. As we rounded a corner a few miles from our intended destination I swerved sharply and applied the brakes: the road now no longer emerged from the mist, but in its place was a river, glasslike and wide beyond sight. As we traced an alternative route on our map (which had been drawn up some degree of artistic licence) we noticed the glow of a cigarette appear and recede through the fog above the water, shortly outlined by the shape of a man on an ailing raft, the slow revolutions of its motor phut-phutting through the fog. Ignoring Chris de Burgh’s somewhat unfair advice we paid the ferryman at the outset and crossed the Tisza towards the fabled town of Tokaj.

Since my first wine exams in the 1980s, the name Tokaj has conjured images of past glories, a magnificent history tied up with nobles, treasures, conflict and above all the finest of the world’s sweet wines for many centuries. Tokaji (the wine of Tokaj), was traded by Kings and Princes, coveted by Popes and adored by Queens, notably Victoria who every birthday received 12 bottles for each of her years from Emperor Franz Joseph. Generous, though 972 bottles does seem excessive for an 81 year old. Two world wars and the rise of communism however had left the vineyards and wine a shadow of their former selves. Before the 1950s, superior plots were prized with a grand cru status not unlike burgundy, but under Soviet administration their grapes went into basic blends with little regard for quality. It was as if the finest chateaux of Bordeaux had to mix their wine with vin de table. Thankfully, since the reintroduction of privatisation in 1991, the area has begun the transformation to reclaim the title it once held. Seemingly accepted into the Hungarian language, ‘Renaissance’ is the word on everyone’s lips in Tokaj.

The reason for the wine’s fame is the mist we encountered during much of our stay that November. Usually thick in the morning and burning off by midday, though occasionally lasting into evening, it creates ideal conditions for the formation of rot on the now fully ripe berries. The majority of wine regions go to great lengths to avoid rot, though, where conditions are suitable, a number encourage its attack on the berries, in order to shrivel the grapes leaving a more concentrated and sweeter juice inside. In these regions (Tokaj, Sauternes, areas of Germany, etc.), the vinegrower’s utopia is to have a vineyard full of fully rotten raisin-like berries, though often perversely, as in 2004, many of the grapes fail to rot and remain healthy on the vine, destined for inferior dry wine.

Not that I imagine many Hungarians would thank them, the Turks are another reason for the quality of the wines of Tokaj, in more ways than one. Legend has it that in the late 1500s, during one of the many Turkish invasions, the northern vineyards were left without pickers who went to fight, and the grapes were left to rot on the vines. The harvesters returned and picked the first harvest to be made into wine from grapes heavily affected by rot. And later, in order to protect the precious liquid from marauding hordes, a system of narrow caves developed in the hills, their entrances modest and easily obscured in time of crisis. Humid, dark and consistently cool, in many cases these still provide the ideal conditions for the maturation of wines in barrel and bottle.

Our last afternoon found us in one of the most ancient of Tokaj’s cellars, that of Oremus, one of the leaders of the renaissance. In from the grey, our sounds muffled by the thick black fungus that lives on the cave walls, the deep golden liquid in our glasses swirled in stark contrast to the world around. Each sip brought a dazzling array of flavour, the unctuous and stunningly delicious elixir speaking of a spirit that could not be dimmed, something that was mirrored in the warmth and generosity of the people making these wines. 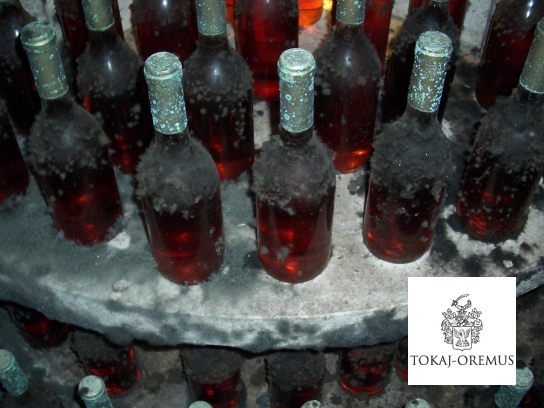