The battered Toyota minibus skidded to a halt beside me, dust billowing in the late afternoon heat. Three Hezbollah soldiers spilled from its rear door and ran towards me.

This I found somewhat unnerving, having spent my flight to Lebanon reading about the country’s turbulent political history. I had wondered how being English might affect my standing with the Sunni, Shia, Druze, Alawi and Marionite factions and whether I should ally myself to the Phalangist or Palestinian cause. In the end I had decided to do what came naturally and plead ignorance. Anyhow, I had nothing to worry about, according to a (with hindsight, less than well-informed) representative of the British Embassy in Beirut. ‘Everything is cool in Lebanon, don’t worry.’ It seems I’d sought advice from the wrong source, as had I called any other European embassy I now know that I wouldn’t have been alone in Baalbek (Hezbollah heartland) standing outside a delightfully tourist-free temple dedicated to Bacchus, the Roman god of wine.

Baalbek is at the northern end of Lebanon’s Bekaa Valley, a twenty mile wide plain abutted by two mountain ranges that run down the east and west flanks of Lebanon. Whilst sun-drenched and Mediterranean, the climate here is tempered by the cooling effect of attitude (900m) and mountain breezes. The overlooking peaks are often snow capped (the melt providing year round natural irrigation for the vines) and it has a rich variety of soils that are perfect for vine cultivation.

It is one of the world’s natural wine lands and was, via the Phoenicians, the vinous starting point for many of Europe’s wine regions. The conquering Romans thought highly enough of the valley to build the largest temple they ever dedicated to their wine god. Impressive on an Egyptian scale, the Temple of Bacchus remains remarkably well preserved despite nearby temples lying in ruins. Those Lebanese who are partial to a glass of wine put this down to divine intervention, whilst others choose to ignore the coincidence. Unusually for the Middle East there is a balance of both in the country; there being a large wine-drinking Christian minority (40%), and secular elements within the Muslim majority. The combination hasn’t always been a harmonious one (try Wikipedia, too much history for here!) and Lebanon’s problems have in the past stymied the development of the wine industry. However, peace since the end of the civil war (1975–1990) has allowed it to flourish, and the last five years alone have seen the number of wineries grow from 15 to 35 in number. Yet their total production is still only six million bottles (less than many commercial wineries elsewhere) which is why few in the UK even know that Lebanon produces wine, let alone will have tried any.

Some may have encountered Château Musar, a truly wonderful wine (age it ten years and you’ll find it even better - an elixir to marvel over) steeped in a history of wine production through adversity, but the story only begins there. The insuppressible optimism of the Lebanese winemaking community seems to know no bounds. There are eco-friendly state-of-the-art wineries being built into the hillsides, where minimum environmental impact is as important as the wines’ quality; the finest sites are being sought in the mountains (cooler and with the best soils) and planted with a view to producing wines to rival the world’s very best, by people with the know-how to do so. There were a couple of wineries I visited whose exquisite output would easily grace the same tables as the stratospherically over-priced first-growths of Bordeaux; indeed I’ll be so bold as to say that in some cases they may even beat them in a professional blind tasting. But these wines are still in barrel and tank, yet to be released, so I’ll say no more for now.

It will take time and continued political stability for the wines of Lebanon to become more prominent in the UK, since they are at present being snapped up as quickly as they are produced; but should you chance upon them, do give them a try. There are of course some to avoid, as in any country, but if you’re feeling like experimenting with something new, try: Massaya (Berry Brothers), Château Musar (Majestic), Domaine des Tourelles Syrah du Liban (Lebanese Fine Wines), Kefraya (Great Western Wines) and you’ll get great value from Château Ksara (HallgartenDruitt).

The purpose of my visit I chose to keep secret from my decidedly tee-total Hezbollah inquisitors as they asked about the nature of my travel in Lebanon. I actually don’t think I’d have offended otherwise, as they were perfectly civil, only wanting to see if I wished to buy a rather natty tee-shirt loudly embroidered with a missile launcher motif. They encouraged me to take care as there’d been a kidnapping by another militant group in the area only a few months ago, something they were surprised hadn’t been mentioned by my embassy.

My travel advice if you do go to Lebanon? Don’t stray beyond where the (French) embassy suggests; or if you do, make sure you buy the tee-shirt. 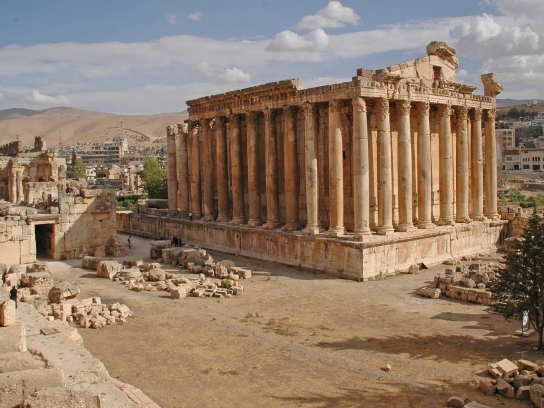